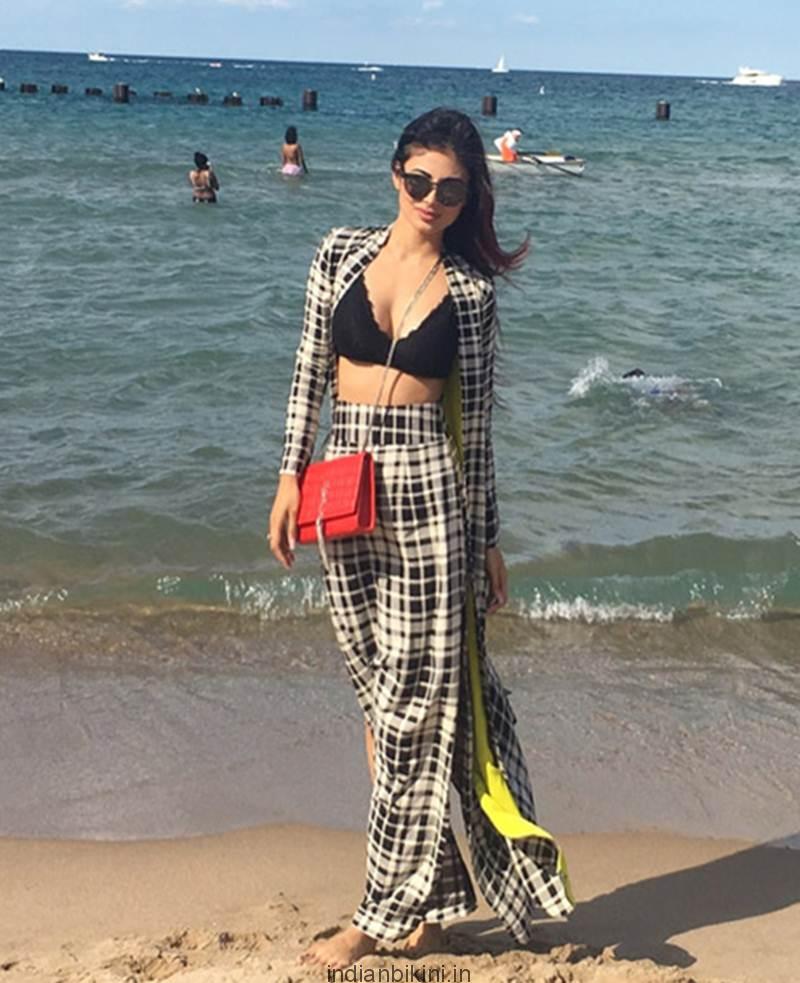 Super hot TV actress Mouni Roy is soon officially making her debut in Bollywood. Already making enough news with her popular TV series, Naagin, and her upcoming Bollywood project, the TV actress is now grabbing eyeballs for her sexy photos from the beaches of USA. Mouni was in Chicago, America enjoying a much needed break before she dives head first into production.

Several photos of the actress have been posted as she enjoyed the sun and sand in a sexy blak lace bikini top. The actress is always known to be fashionable and paired her bikini top with a black and white checkered coat and matching pants. She completed her monochrome look with a bright red bag. Her slim figure is beautifully boasted and her toned abs are peeking out from her mid-riff. 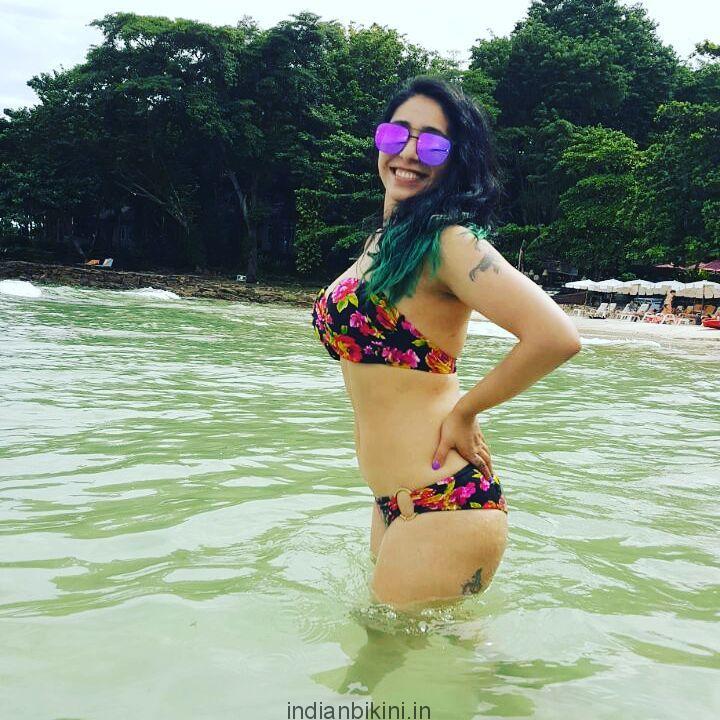 Neha Bhasin has always been known to flaunt her body unabashedly. The Viva pop girl band singer broke free to become one of the most popular Indian singers of Bollywood.

Neha has always been a strong advocate of loving your body as it is and has taken a stance against body-shaming. Neha took to Instagram to share some super hot photos in a skimpy black and white bikini. With the gorgeous beaches of Bali as her backdrop, Neha posted a series of photos in a black printed bikini while enjoying her time on the beach. A self proclaimed beach bum, Neha works out hard to maintain her figure and is proud to not be conventionally skinny. She carries off her bikini with such confidence that she is making heads turn.

Despite the trolling and shaming, Bhasin continues to flaunt her hourglass figure and her curves like the brazen vixen she is. 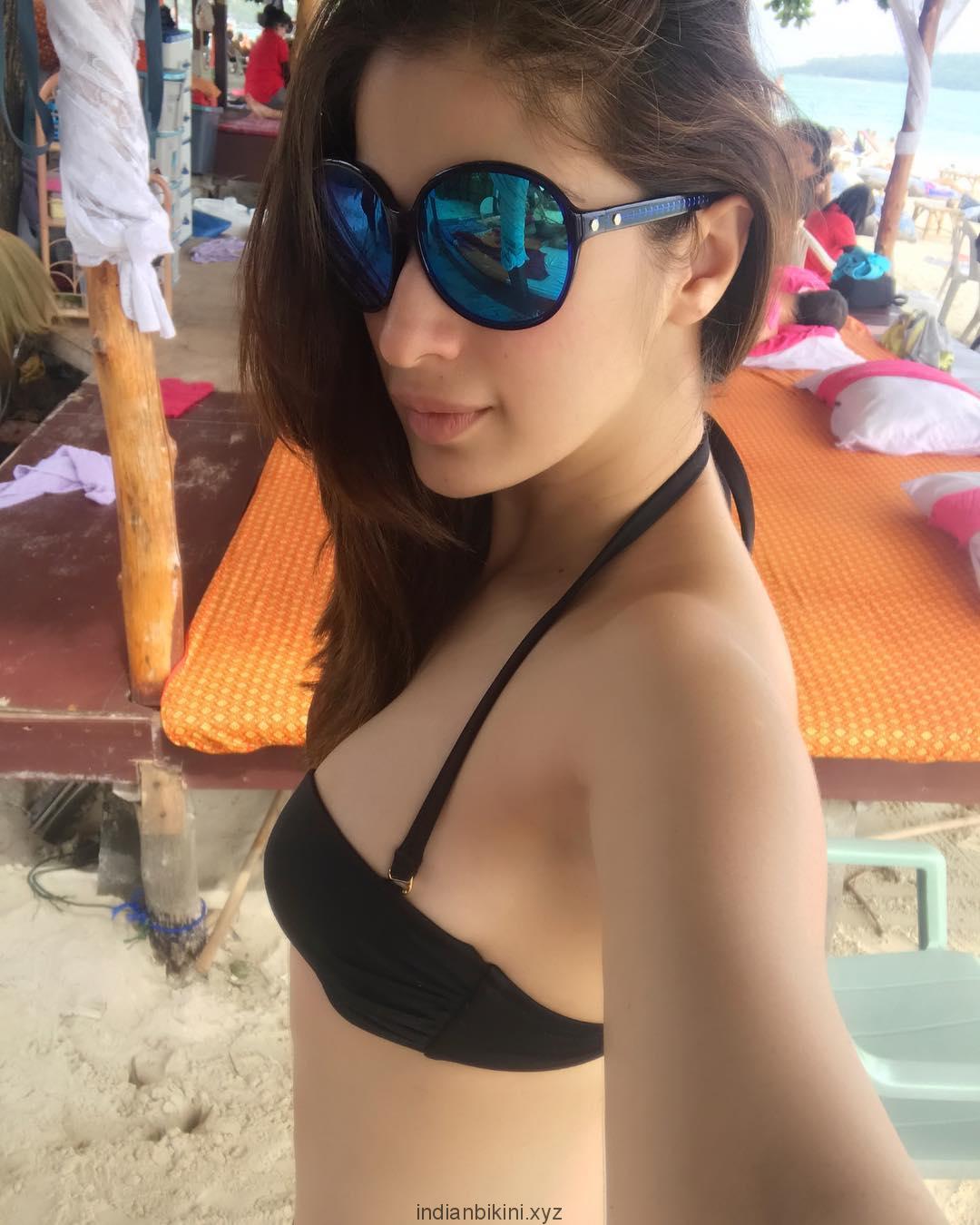 Raai Laxmi has been posting photos and counting down the release date of her bold venture, Julie 2 with her fans. The actress has been under the spotlight with the sexy photos she’s been posting to keep the buzz of her film alive.

But Raai is not only bold on-screen but off-screen as well. The debutant actress has posted photos of her USA holiday. While she made pit stops in Manhattan and many other cities in USA, her uber sexy photos from the sunny beaches of Miami has grabbed eyeballs.

Raai chose a tiny black bikini to show off her slender figure in the beach town. Though her photos are crowded by onlookers, she definitely steals the limelight.

Her fans are already privy to her sensuous curves and svelte body. These natural photos just add to her charm. Raai is seen enjoying herself on the beach in a hot pink bikini. Her pink bikini peeks out of her white overall and the outline of her figure looks enticing. whether she is sunbathing, enjoying a drink or playing around with her sister and friends, Raai looks like she is having a gala time in the USA. 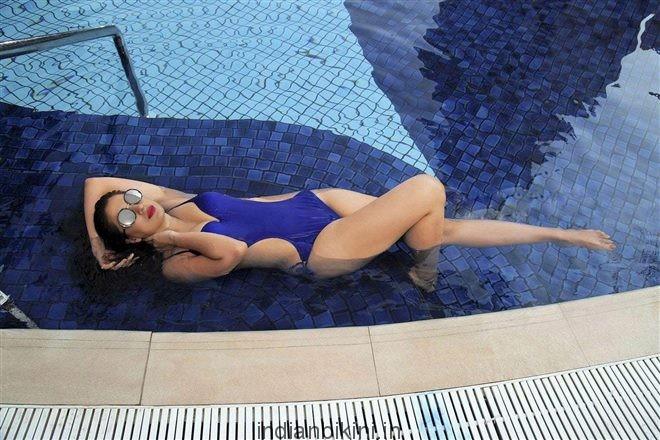 The Julie 2 actress is catching quite a bit of limelight ever since the announcement of her movie. Julie is known to be one of the boldest films of Indian cinema and the expectations from Julie 2 are nothing less.

In order to promote her film, lead star Raai Laxmi, has taken to social media to keep her fans enticed and updated. Keeping with the theme of the movie, each of Raai’s photos are hotter and sexier than the previous one. Wearing a stripped colorful two piece, Laxmi is seen posing in a pool. In another series, she is adorned in a royal blue bikini and enjoying the cool waters of the pool. She has been counting down the days to her film and giving her fans a glimpse of her bold look in the film as well. Posting a photo in a deep cut olive green printed monokini, Raai is walking across a pier in high heels. This seems to be a still from the movie. Her toned body is on display and her legs seem to stretch forever thanks to her heels. The poster from her film has the young star wearing nothing but a magazine cover and a hat on a beach looking super sexy.

Her fans are already sweating looking at these glimpses of the actress on the small screen, we wonder the how much steam will emit from the theatres when the film releases. 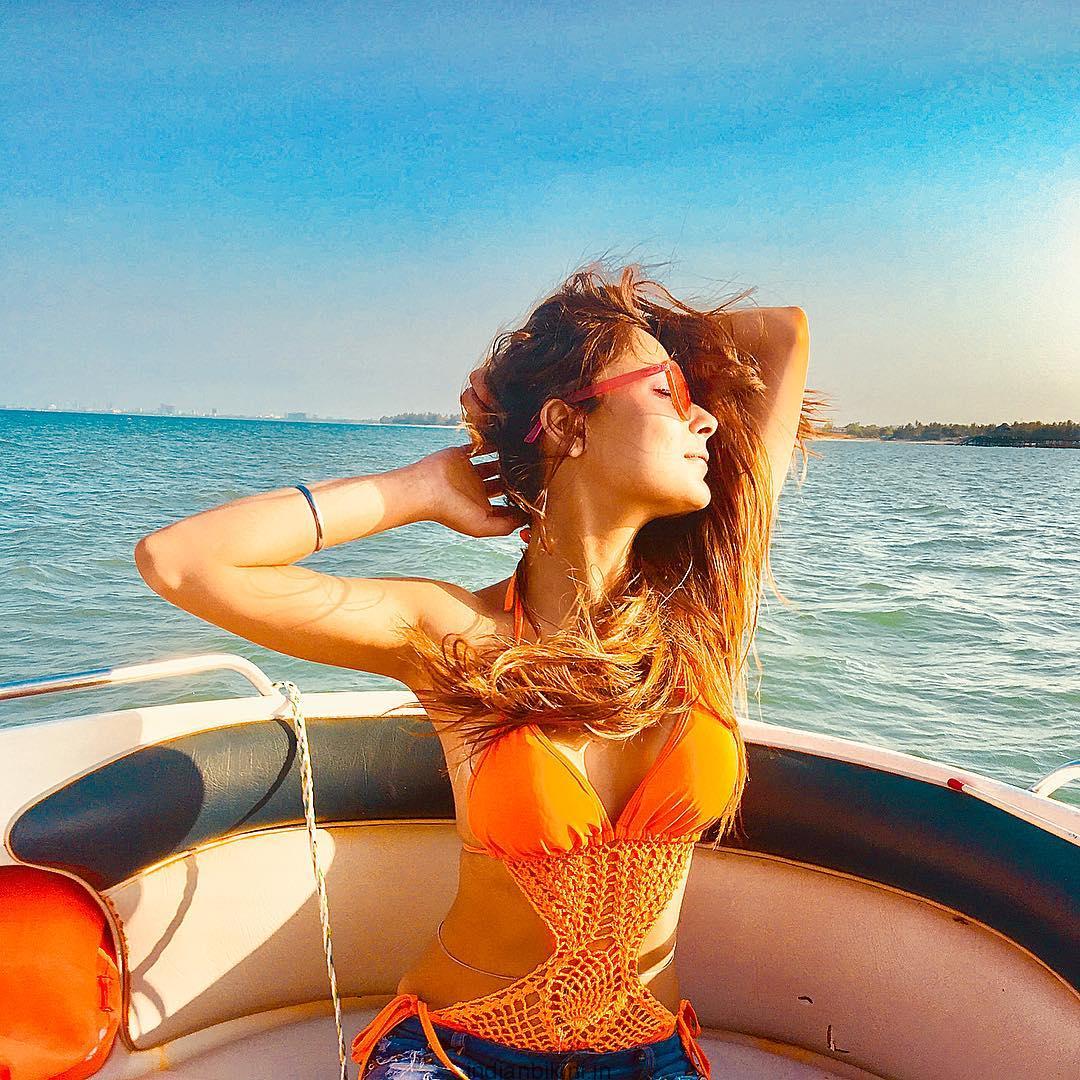 Ssara Khan has never been shy of flaunting her bod. She works mighty hard to remain in such fabulous shape ( all her gym Instagrams are proof!) and she never shies from a chance to flaunt it.

After her sexy Pattaya photos hitting the internet, Ssara posted some photos from her trip in Tanzania. Dressed in a trending knit bikini in a bright orange colour, Ssara looks like a bright pop of energy amidst the never ending blue waters.

She wore cutoff denim shorts while she rode a speedboat in Mbeya. She took port in the beautiful Mbudya island, where she strutted some poses and partied with her friends. Her funky coral coloured sunglasses add to her look. 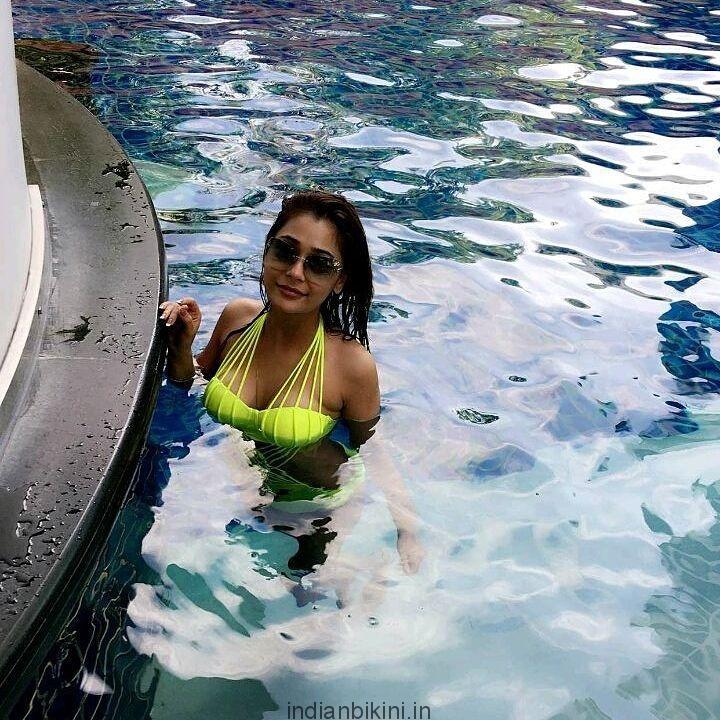 Actress Ssara Khan is known for her girl next door and ideal housewife roles but the telly diva has never been shy of flaunting her body.

Ssara holidayed in the sunny beaches of Pattaya in Bangkok with her sister, Ayra Khan. She posted some photos for her uninhibited fun while enjoying the calming waters of her hotel pool. Dressed in a spunky neon yellow bikini, Ssara is seen lounging on a poolside chair showing off her slender figure. She also clicked some snaps in the pool.

Her last photo tagged the Central Festival Pattaya Beach has a view of her toned back as she takes in the sights her hotel room has to offer. The photo gives a glimpse of her room, a food platter adorned on her bed and the lavish lifestyle the actress has been blessed with. 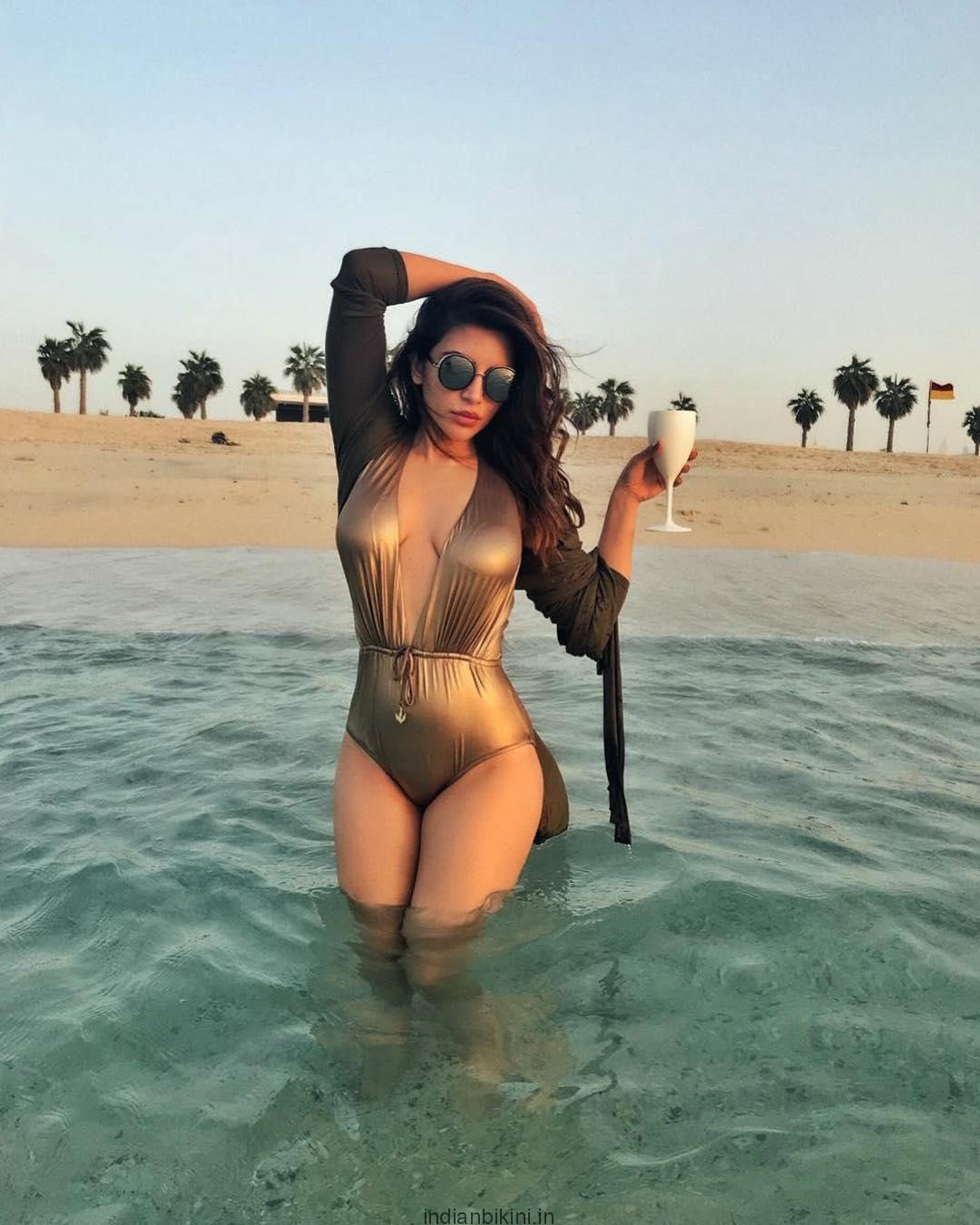 Shama Sikander’s Dubai trip is nothing less than extravagant. Her life seems like a never ending holiday, first Europe and now a luxurious Dubai holiday. Shama posted some pictures from in and around her hotel in an uber sexy golden bikini. The halter one-piece has a plunging neckline and makes her look enticing and seductive. She is posing with a drink in hand on the beach standing knee-high in the sea. She looks exotic and sexy and is definitely getting the temperature soaring.

In another photo, Shama is posing poolside in her Hilton hotel. Her final photo in the golden bikini is eye grabbing as she lies seductively on the lounge chair, showing off her hourglass figure.

In another series of photos, Shama is seen enjoying with her beau on yatch. With the sea breeze in her hair and glass of bubbly in hand, Shama wore a white bikini top with high rise shorts and a coat making her look classy and sexy. She posed with the vast blue waters as her backdrop, making all her fans jealous with wanderlust. 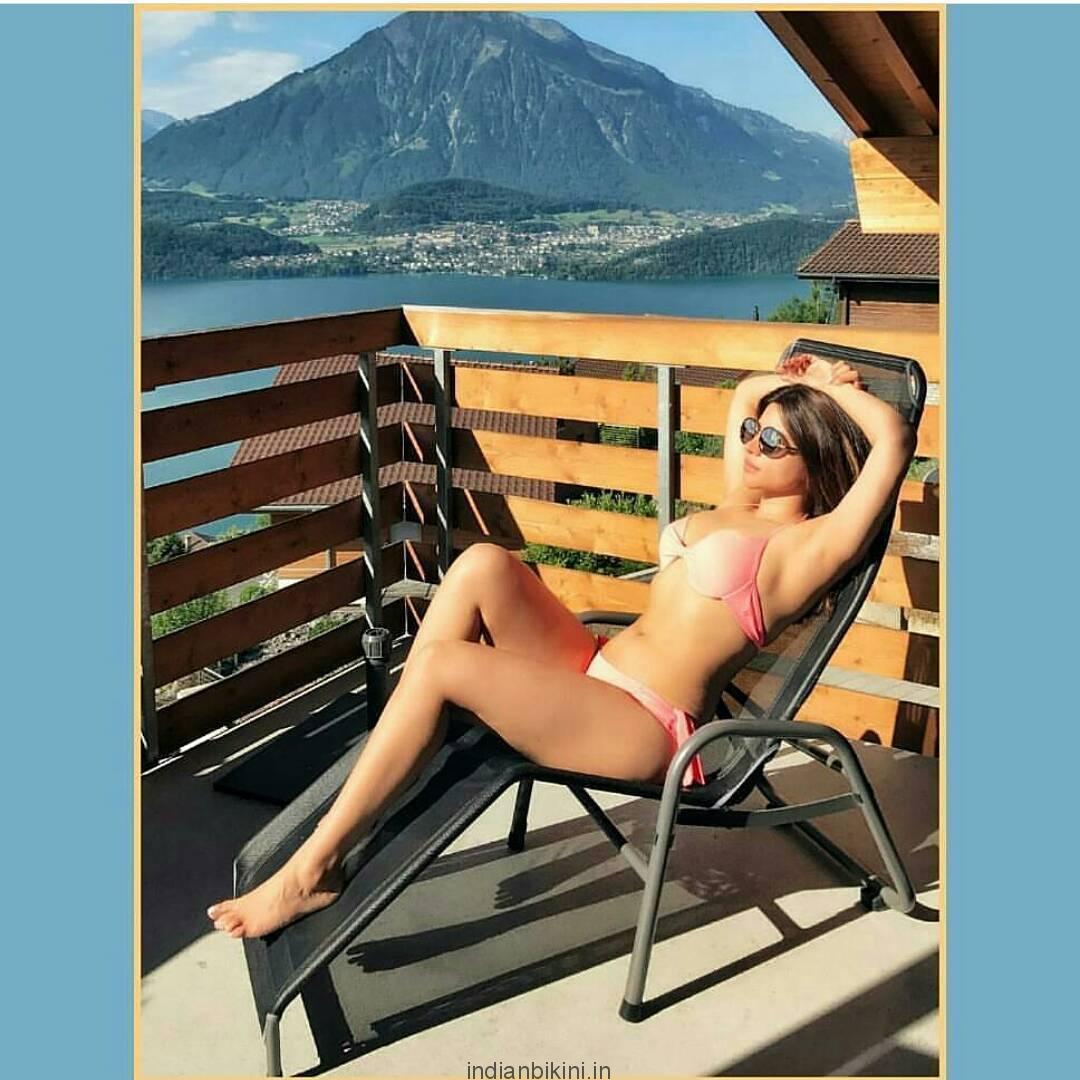 While Switzerland is infamously known for its snow capped mountains, actress Shama Sikandra shows us the sizzling side of the beautiful European country. Seen sun bathing in the balcony of her spa and retreat, Shama looks flawless in a pink halter neck two-piece bikini. Her curves and svelte body glisten in the sun and there is no denying that she is raising the temperature in Switzerland.

in another photo, she poses by her hotel pool sowing off her lean frame. The actress captioned her photo with the words if she is a mess she’d rather be a hot mess. And the words definitely hold true.

For the second leg of her her trip she is seen enjoying the Turkish baths in Budapest. Dressed in a fun floral printed monokini, Shama was getting nostalgic about her time in the beautiful place. She claims to be a complete water baby and missed the Turkish baths hoping to go back. 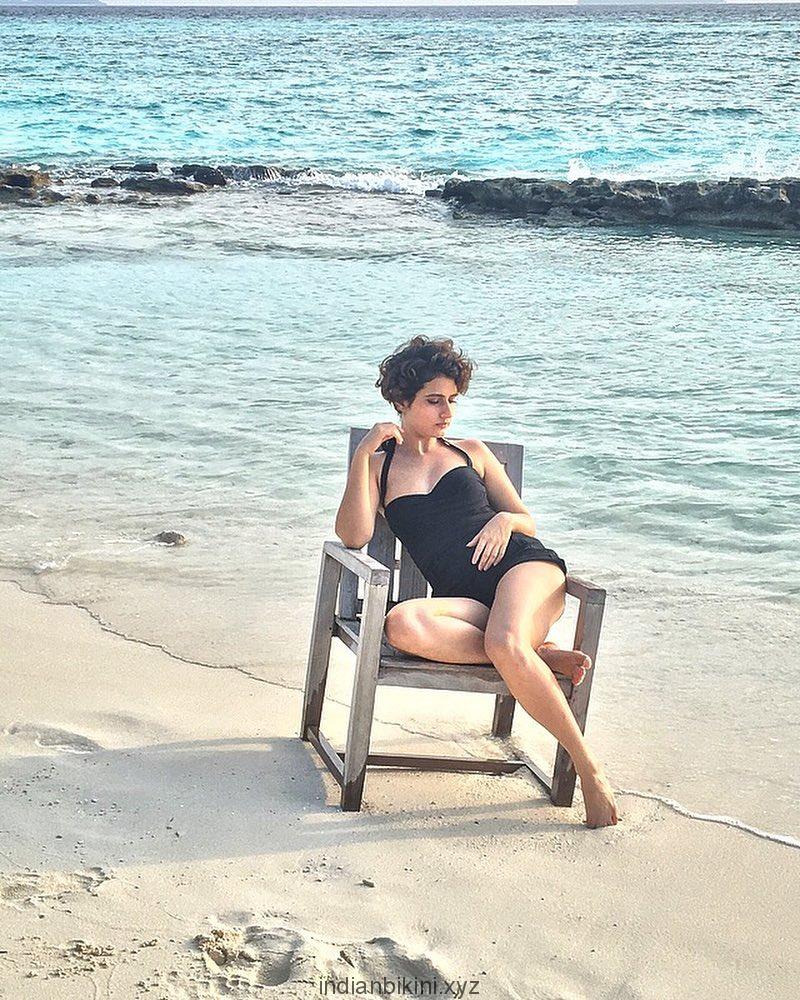 Dangal girl, Fatima Sana Shaikh, has been trying to break into the industry for quite some time now. The young actress got lucky by bagging a big role in the blockbuster Dangal where she worked and was mentored by Aamir Khan.

Her new found fame has now got offers pouring in and  while she was shooting for her next, Thugs of Hindostan, Fatima decided to share some pictures with her fans. Fatima posted a photo from the pristine beaches of Malta, Greece where she indulged in some ‘me time’ in between her shoot.

Perched on a wooden chair on the white beach with nothing but the never ending blue sea and crashing waves in the background, Fatima looks ravishing in a black halter monokini. From her short curls  to her long legs, which seem to be another thing we can fixate on, Fatima looks flawless in this breathtaking setting.

She even took photos from her hotel room in a white shirt and from her balcony in a blue and white stripped dress over her bikini.

However, what started off as an innocent post to share her whereabouts and the beautiful scenes turned into a reason for trolling her and shaming her for putting such photos up during Ramadan. 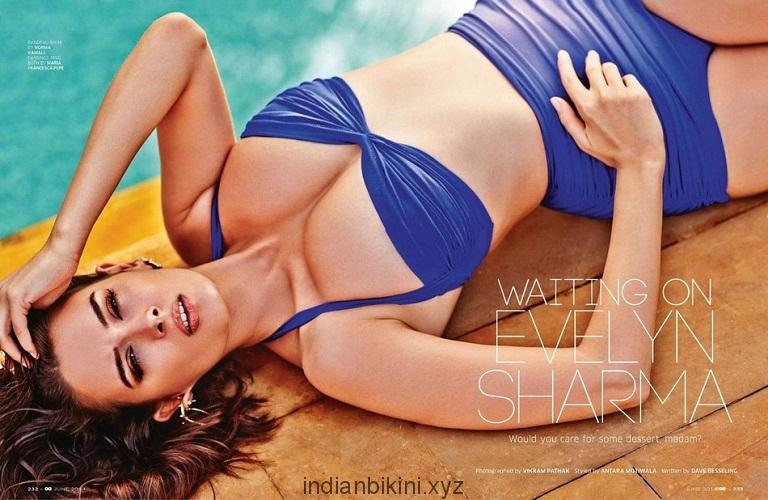 Social media sensation Evelyn Sharma has transfixed her fans with her beautiful looks and her sexy body. The diva has also had some small stints in popular movies making her all the more famous and desirable.

Evelyn bagged a a spot in the coveted magazine, GQ where she flaunted her stellar curves.

Dressed in a halter blue bikini top and high waist bottoms in the covering page, Evelyn is lying by a pool for her first photo. The stunning actress is always treated like a queen, and looks like a queen as well.

Her Swarovski crystal halter monokini shows off her curves beautifully. She is posing against clear blue water, which makes her the prime focus. She looks sultry in the photo in which she is coming out of a pool in a red bikini top. And her grayscale pictures in the white revealing bikini top are a sight for soar eyes.

Evelyn’s GQ spread is surely a treat for her fans and guarantee she’ll get many more!